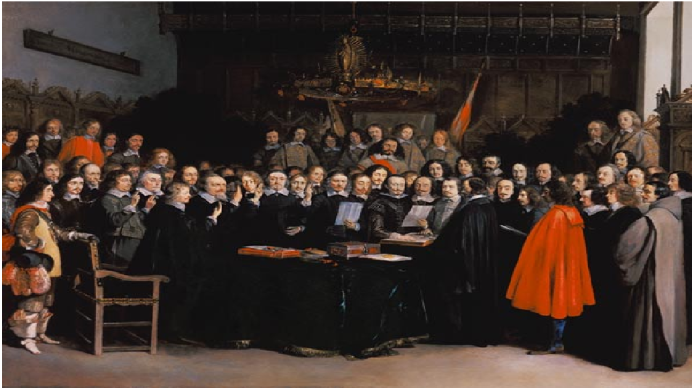 Painted in 1648, the painting above was considered one of the early masterpieces of the Italian artist Gerard ter Borch. The painting has two names, The Signing of the Treaty of Westphalia or The Swearing of the Oath of Ratification of the Treaty of Munster. As can be inferred from the name, the painting portraits the ending of the Thirty years war, which Gerard ter Borch attended. Executed on copper, the painting takes place in the council chamber of the Town Hall of Munster and includes paintings of seventy-seven men. The artist uses minute detail to describe the surrounding and make the people look like realistic figures. Furthermore the artist paints six Dutch delegates behind the table in the center with two Spanish delegates on the right and a French delegate stands behind the Spanish delegates on the extreme right. Each of these delegates holds their right hand up in order to swear the oath. Finally, on the far left there is a self-portrait of the artist himself.