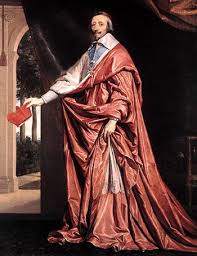 Armand-Jean du Plessis, Cardinal and Duc de Richelieu (1585 – 1642), became a cardinal in 1622.  He became chief minister to King Louis XIII of France and as such enjoyed considerable success implementing reforms in France. He also secured the country’s position abroad by ensuring that the German states were not united under Habsburg control, and by successfully prosecuting French interests during the Thirty Years War.He governed France as chief minister from 1624 until his death in 1642.

This portrait is one of several variants of a full-length composition showing the minister in cardinal’s robes and wearing the Order of the Saint-Esprit. For a prince of the Church to have himself portrayed standing like a secular prince was novel and was presumably intended to underline Richelieu’s role as statesman.

The terrace to the left and the garden beyond may represent a view of the gardens at the cardinal’s château at Rueil, near Paris. Champaigne repeated the attitude of the face turned to the left in his ‘Triple Portrait of Cardinal Richelieu’ of 1642, also in the National Gallery.