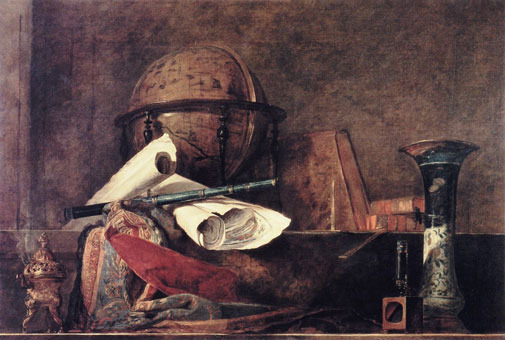 This artwork was created by Jean Baptiste Siméon Chardin in 1731 and is known as “The Attributes of the Sciences”. The name itself reflects the purpose of the image and what it depicts. In the painting we can see a vivid representation of the Scientific Revolution and the discoveries and inventions used at the time. We see instruments that were used in observing nature, such as a globe, a telescope, a microscope, as well as books and maps. The books, maps, and globe in particular can represent the documentation and dissemination of knowledge in science.

This image is what is called a still life, which is a painting with nothing but a focus on inanimate objects that represent the theme and motif of the image. There are no people in the image and the scientific instruments are placed in the center of the painting, representing what can be referred to as the scientific gaze, and this idea refers back to the title, for “The Attributes of the Sciences” can be seen as a reflection or depiction of the scientific revolution and the new world view and perspective that was gradually accepted during the artist’s time.

As for the style of painting itself, it is very distinguished from most artwork of this time. Chardin stood out from most contemporary French artists, for he did not exactly strive for sensual pleasure but rather found inspiration from the Dutch and Flemish Baroque styles of paintings because he sought for a more reflective and morally charged way of painting.