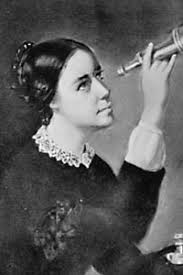 Maria Margarethe Winkelmann’s father, a Lutheran minister, believed in education for women and began teaching her from an early age. When her father died, her uncle continued to teach her.She showed an early interest in astronomy.Despite the fact that her gender excluded her from studying at university, many astronomers of the age were not university educated, and most of the actual practice of it took place outside. Maria worked with her husband, who was also an astronomer, but didn’t make any of her own discoveries until 1702. In 1702, Maria Winklemann discovered a previously unknown comet. The comets discovery was published by her busband, who did not givecredit to Maria because he feared that as the Academy’s official astronomer he could not acknowledge his wife’s contributions openly. In an event, he made up for this in 1710, by revealing the true discoverer of the comet as ‘my wife’, but it was not renamed. Despite this issue, Marias skill and accomplishments were widely admired. The photo above shows Maria Margarethe Winkelmann looking into a telescope as she is making her discovery of the ‘Comet of 1702’.

1 thought on “Maria Margarethe Winklemann & The Comet of 1702”