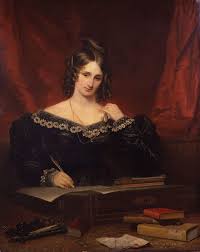 Mary Wollstonecraft was an English writer who advanced the strongest statement for the rights of women.  In her book, “A Vindication of the Rights of Women” she mentions problems with the views of many Enlightenment thinkers. Her mission was quite simple; to explain how men and women are totally equal beings. Although it was very simple, Wollstonecraft was dealing with very close-minded thinkers who were under the impression that men and women were almost NOTHING alike. Men were viewed as powerful and free, while women were viewed as vulnerable objects. Wollstonecraft argued that women should have equal rights to education, economic, and political life as men do.

In the painting above, Mary Wollstonecraft is writing her book ‘A Vindication of the Rights of Women’ on a desk and is surrounded by books. Her facial expression looks as though she is thinking hard, just as a male Enlightenment thinker would. Although she is dressed up very fancy in the painting, I viewed her same as I would for a male because of what she is doing. I didn’t think that because she is a woman she isn’t doing her work properly because she is too distracted by the way she looks or that what she is doing isn’t what women should do. This is a clear example that even though men and women are very different physically, they can accomplish the same tasks and should be looked at equally. This idea is shown very clearly in the painting above. Mary Wollstonecraft, a female Enlightenment thinker, has made this point very clear.