The Church of the Fourteen Saints was also known as The Basilica of the Holy Helpers, or Basilica Vierzehneiligen. It was a masterpiece of late Baroque and early Rococo design. Balthasar Nuemann died several years before the construction of his masterpiece could be completed in the year 1772. Balthasar Nuemanns architechture was known for its detailed interior which consisted of a rich array of statues, gold columns, stucco, creating an intense display of color and texture.
The first picture shows the outside of the Church . The first thing I noticed  when  looking at it was the symmetry it had. If you look closely at the church, you can see five statues on the top of the church, and two at the middle. My guess is that these statues are some of the fourteen saints or holy helpers. 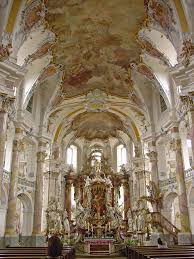 The second picture shows the interior of the Church . The walls and columns in his buildings are opened up to create startling and often playful effects while also retaining a sense of symmetry and harmony, just like
the outside. Neumann made use of domes and barrel vaults to create sequences of round spaces. The elegance is highlighted when the daylight  streams in through huge windows. The liveliness is shown by a lavish use of decorative celling and wall art and statuary.